The British & Irish Lions captain, Sam Wharburton has been denied the opportunity of a rematch with New Zealand in November after it was revealed he will be sidelined for four months because of neck surgery and will miss Wales’s autumn internationals.

Warburton, who led the Lions in July, suffered a recurrence of the longstanding neck injury in training for Cardiff Blues this week and scans have revealed the 28-year-old flanker requires surgery.

It is a blow for Warburton, who overcame six weeks out with a knee injury to captain the Lions in the second and third Tests against the All Blacks. He now faces another lengthy lay-off and will be in a race against time to be fit for next year’s Six Nations.

Unlike a number of Premiership Lions, Warburton had sat out his side’s opening matches of the season and the Blues had hoped an extended break after the series against New Zealand would benefit the 79-cap flanker. The persistent neck injury that ruled Warburton has proven difficult to resolve. “It’s a major blow for all concerned; it’s a blow for Cardiff Blues and Wales. We all hoped he would be back playing soon,” the Blues head coach, Danny Wilson, said.

“It is a longstanding issue that he has had. He gets pain and discomfort on and off. The feeling was that two months off would help it settle completely and do him a world of good. He came back feeling confident about it. He went through the protocols when he came back to training and during the contact element, just on pads, it began to flare up again. We looked into it in more detail and it has led to where we are.

“He is obviously extremely frustrated. He thought that after two months he would come back really fresh and that is not the case, but this is the right thing for him to do. He’s a very good professional and I’m sure he will apply himself to his usual standards.”

This autumn Wales, who in January appointed Alun Wyn Jones, will host Australia, Georgia and South Africa as well as the All Blacks, who are due at the Principality Stadium on 25 November. In a cruel twist, the Welsh Rugby Union announced that the fixture – in which Warren Gatland will renew rivalries with the world champions – had sold out hours before Warburton’s injury was revealed.

Gatland now has a headache over his back row for the autumn, with Ross Moriarty still sidelined with the back injury picked up during the Lions tour and uncertain of when he will return to fitness. James Davies and Ellis Jenkins have already been ruled out for the autumn campaign through injury while Thomas Young is yet to appear for Wasps this season.

Justin Tipuric is likely to continue at openside, having played there throughout the Six Nations, and the No8 Taulupe Faletau has made an impressive start to the season with Bath, but it is unclear who will wear the No6 jersey. 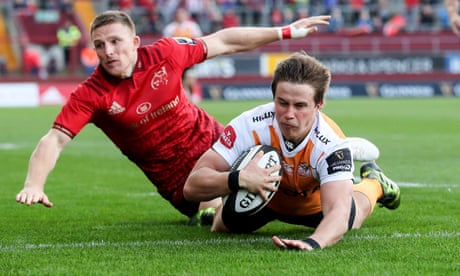 Warburton has been beset by injuries in recent years and this is his sixth operation. He has been plagued by shoulder trouble, sustained a broken cheekbone last September and suffered a hamstring injury during the 2013 Lions tour of Australia. In total he has managed only 15 Celtic League appearances for the Blues in the past two seasons but has repeatedly spoken of his desire to play at his third World Cup, in Japan during 2019.

While Wales’s options in the back row are now limited, for the Blues, who have lost their opening two Pro14 matches, the situation is worse, with Jenkins and James Botham sidelined. “We’re only two games into the season but it has been well documented we have nine first-team players unavailable,” Wilson added. “There’s one or two on their way back but you have to get on with it. It gives opportunities to develop young Welsh players, which will help us in the future, but for now we need to get some of our high-end pros back on the pitch.”

The home nations will have an advantage over their southern hemisphere rivals this autumn because of their familiarity with the six law amendments recently introduced by World Rugby, according to England’s top referee, Wayne Barnes.

The changes – three at the scrum and three at the breakdown – are designed to encourage quicker ball for the attacking team and came into effect in the northern hemisphere on 1 August. They do not begin in the southern hemisphere until January but will be used this autumn when England host Argentina, Australia and Samoa, and Wales host New Zealand.

Barnes said: “Unfortunately for the southern hemisphere, but fortunately for us, come November they’ll be playing under our laws so they’ve got to get used to them. If we get a small advantage up here, I’m sure the coaches will try to use it.”

“I don’t there’s an abuse issue in the game at all,” said Barnes. “There’s a lot of respect. Of course players get excited during the game but that relationship is so special within our game.

“ [Brits] was just really frustrated with what had happened. I think we all understand his frustration and it shows his emotion and how passionatehe is. He knocked on our door and said ‘that was out of order’ at half-time.”

Karl Dickson, the former Harlequins scrum-half turned referee, believes officials are fitter than modern players. “That was my biggest surprise: I was ‘wow’ at how much fitter than players they are. It took time to get up to speed,” said the 35-year-old, who was appointed to the RFU’s panel of elite referees during the summer.